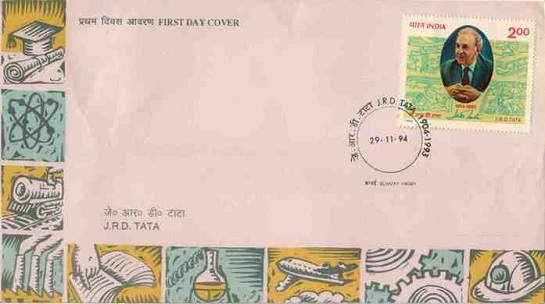 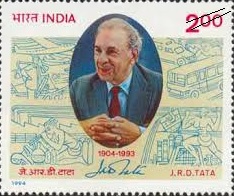 Jehangir Ratanji Dadabhoy (J.R.D.) Tata (29 July 1904 –29 November  1993) was a pioneer aviator and important businessman of India.India Post issued two stamps in honour of JRD Tata.First in 1994 and second ,a definitive stamp of 15 Rs under builders of Modern 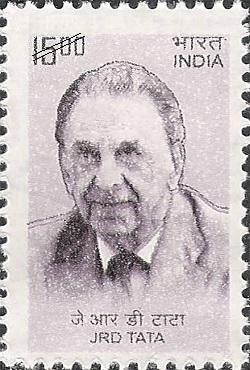 India series. He was awarded India’s highest civilian award, the Bharat Ratna in 1992. He later came to be known as the father of Indian civil aviation. He founded India’s first commercial airline, ‘Tata Airlines’, in 1932, which in 1946 became Air India, now India’s national airline. At the age of 34, he became Chairman of Tata Sons, the holding Company of the Tata Group. For decades, J R D directed the huge Tata Group of companies, with major interests in Steel, Engineering, Power, Chemicals and Hospitality. He was famous for succeeding in business while maintaining high ethical standards. The Tata Institute of Fundamental Research was founded by Dr. Homi Bhabha  after he approached J.R.D Tata requesting his support towards the establishing of a scientific institution. The institution was founded in 1945.