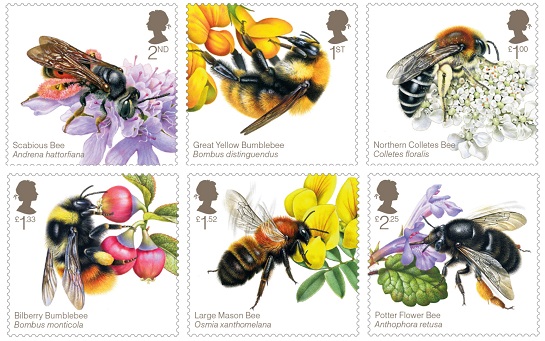 Six UK bee species chosen for the sheet stamps to give representation of all parts of the UK, different habitats and the different kinds of bee species that breed in the UK (two bumblebee species and four ‘solitary’ bees). The miniature sheet is devoted to the honey bee.The six individual stamps have been designed by Anna Ekelund and illustrated by prominent wildlife illustrator Richard Lewington. Each bee is shown on or near a flower appropriate for the species of bee.The stamps will be released on 18th August 2015.

Scabious Bee(Andrenahattorfiana):One of the largest solitary bees and a ‘mining bee’. Has declined in range but today South West England is key area. Other populations in East Anglia and South Wales. Lives in sandy or open grassland, and the plant field scabious is essential, as its pollen is used to feed the young larvae. This reinforces the connection between insect and plant, and the interdependence. If populations of one falls, the other suffers decline. 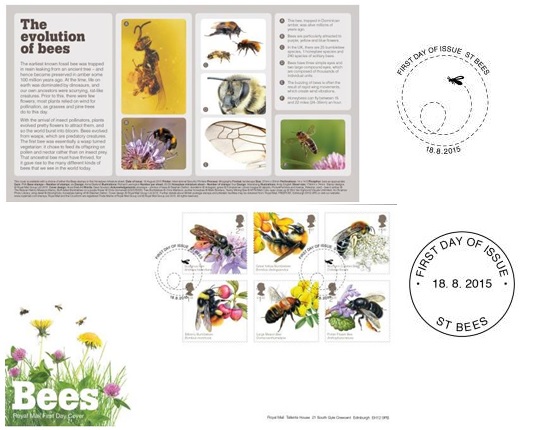 Great Yellow Bumblebee(Bombusdistinguendus):Shown onBird’s-foot Trefoil(Lotus corniculatus),A flagship conservation species for Scotland and at extreme of range now (thought to have declined from 80% of its historic range in the UK). Forages in grassland on clover, vetch and knapweed.

Northern Colletes Bee(Colletesfloralis):Shown onWild Carrot(Daucuscarota).Recorded in Northern Ireland in 2003 for the first time in 70 years. UK and Irish population represent 50% of global total, so very important. Prefers sandy/coastal environment and forages on range of flowers including carrot and parsley family.

Bilberry Bumblebee(Bombusmonticola):Shown onBilberry(Vacciniummyrtillus).Concentrated in NE England but also in Wales and SW England.Higher altitude habitats. Forages on bilberry as well as bramble, raspberry, bell heather, sallow and legumes such as clover and bird’s foot trefoil (hence vital in pollinating nitrogen-fixing plants in agriculture).

Large Mason Bee(Osmiaxanthomelana):Shown onHorseshoe Vetch(Hippocrepiscomosa).Britain’s rarest solitary bee and now found only at two sites in Wales. Females collect fresh water from cliffs and use to make mud in the building of nest cells. Forage nectar from horse shoe vetch, bramble and bugle.

Potter Flower Bee(Anthophoraretusa):Shown on Ground Ivy (Glechomahederacea).Has declined severely and found in few sites in SE England. A ‘flower bee’ that has appearance of a bumble bee but is solitary. Has a preference for sandy soils such as dunes, cliffs and commons. Forages from ground ivy, vetches, clovers, bird’s foot trefoil.