World of the Family Meeting 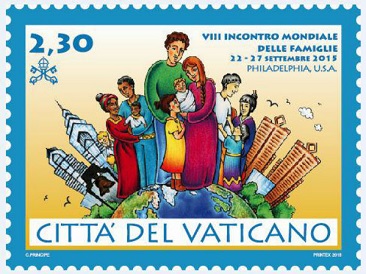 Vatican City’s postal service has released stamp commemorating the World of the Family Meeting in Philadelphia,  Cindy Wooten of the Catholic News Service reports from Rome.

The 2.30 Euro ($2.50) stamp shows families from different parts of the world against a backdrop featuring elements of the city’s skyline and the Liberty Bell.

This year marks the 150th anniversary of the creation of the International Telecommunication Union (ITU), the worldwide organization which promotes cooperation among member states to better use telecommunications, offer technical assistance to developing countries, and favor the harmonization of national policies. Founded in 1865 in Paris as the “International Telegraph Union”, it adopted the current name in 1932. Since 1947 it has been one of the specialized UN agencies with headquarters in Geneva. The institutional profile of the ITU is comprised of three sectors of competence: radiocommunication, telecommunication standardization, and telecommunication development. To mark this anniversary the Philatelic and Numismatic Office has produced a 2.15 euro postage stamp sheet of ten values. The stamps feature a detail of the “Creation of Adam”, the celebrated image of the finger of God reaching out to give life to man, painted by Michelangelo in his frescoes of the Sistine Chapel ceiling. 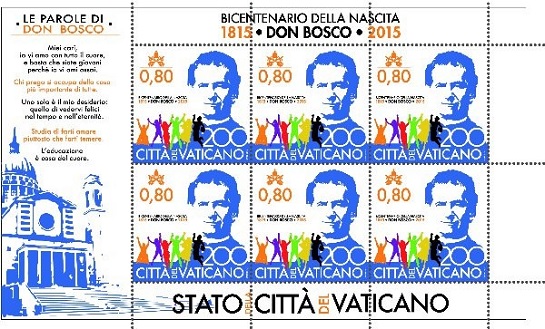 2015 marks the bicentenary of the birth of Saint John Bosco, founder of the Salesian Congregation and the Salesian Family. He is remembered for his great commitment, care and compassion shown to young people, especially the poorest and those with difficulties. “What is important”, he said, “is that young people should not only be loved, but that they themselves should know that they are loved.” He was beatified in 1929 and canonized in 1934. In 1988 Saint John Paul II called him “father and teacher of youth.” The bicentenary marks a time for celebration and thanksgiving for those who have contributed and continue to keep alive this dedication to service and education which has spanned the two hundred years since his birth. Fr. Ángel Fernández Artime, Rector Major of the Salesians, affirmed that, “the bicentenary of the birth of Don Bosco draws us all to a journey of faithfulness to that same calling which he heard, took to heart and responded to throughout his life. It is a year when the celebration of the gift of Don Bosco for the Church and his Family will not be focused on ourselves, looking inwardly or complacently, but one moving us with ever greater strength towards mission”. The Philatelic and Numismatic Office will celebrate the event with an 80 cent postage stamp issue printed on a miniature sheet with six values. The left side features a depiction of the Basilica dedicated to him on the hill where he was born two hundred years ago near Castelnuovo Don Bosco. The stamps feature a portrait of him, a modern representation also giving inspiration for the official logo of the bicentenary.