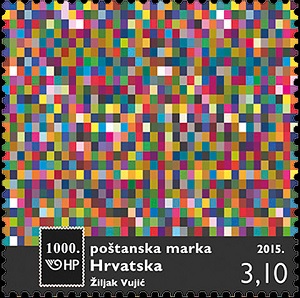 The stamp is a letter.     Today, due to electronic technology, the travelling of the message has been shortened and there are significantly fewer paper letters. But the stamp on them is more and more getting on importance. It is almost as the stamp could be affixed and the signature of the sender added and already would the addressee receive a message in shortened, attractive form into which he/she could immerse with pleasure. Actually the stamp has always been a parallel letter. It offered a whole repertoire of life’s contents which we were exchanging with others.       Since the existence of independent Croatia we have just written thousand such letters.     Thousand stamps, what is that?     That is the triumph of liberation, an aeroplane overflying the country from Zagreb to Dubrovnik, the mass for homeland in the cathedral of Zagreb; Christmas at battlefield, a distraught victim from Vukovar, Madonna with her eyes gouged out; a flag transformed into the rose. Great people and events that marked the history, wonders of land, blueness of the sea;  that the country breaths with – an abundance of  plants and animals;  science and art through centuries; rich heritage which we knew to inherit; modern life in which history is created; striving for better society; needs of children and youth; sports successes; solidarity with the hindered… Thousand stamps also mean involvement in European and international themes, in joint issues with other states…      Thousand stamps, this is the decision that these stamps should be new as the country issuing them.  On these 1000 stamps more than hundred designers published their work with countless unexpected ideas – small masterpieces of art of whom many have been rewarded in the world. We have been receiving awards for modernity, concision, purity and clearness, for excellent relationship between pictorial and notional. Special attention and recognition by even the most demanding juries was paid and given to our opulent minimalism.  But the stamp has – in these thousand issues, also upgraded its traditional shaping. It stepped out from the rectangular frame, it added fragrance to the motif, it used a bar-code as an itinerary of its journeys and is preparing other surprises following up the possibilities of offered by up-to-date technology… The stamp was addressing the youngest, encouraging their activity, concentration, teaching them the values of systemacy, drawing their attention to the respect of the weaker and to following the examples of better people …     These thousand perforated letters – which with their thousand tiny squares also this 1000th stamp wants to emphasise – fortunately, we were also writing to ourselves. No one knows enough on his/her country and the stamp is an exciting way to improve our knowledge and awareness about it.       And when, by means of the small but powerful stamp, our knowledge and awareness are raised, our pride will also get greater. The one with cover.     Croatian postage stamp has been engaged on the above mission already thousand times and this is also its main task.  Željka Čorak