The term Nabakalebara is an ancient ritual associated with most of the Jagannath Temples   when the Idols of Lord Jagannath,Subhadra and Sudarshan   are replaced by a new set of Idols.

In view of Nabakalebara of Jagannath in Puri in July, the India Post will release a special 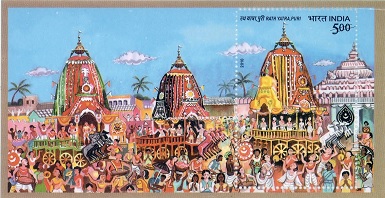 stamp and first-day cover, featuring images of the reigning deities.The culture department will provide Rs 5 lakh to the postal department for publishing one lakh postage stamps.The department said it would promote Jagannath culture across the country. “We should not leave any stone unturned to popularize the mega event, which will be observed after 1996. The state government will release Rs five lakh from the Odisha State Council of Culture for publication of the special postage stamps,” said Odisha culture minister Ashok Panda. The decision to release a special postal stamp was taken following a demand from different quarters. “The Centre has started the process of releasing stamp and postal cover on the occasion,” said a culture department officer. Recently, the postal department wrote a letter to the culture department, seeking funds to bring out the dedicated postage stamps.