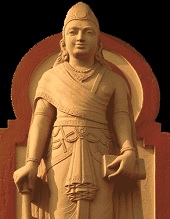 India Post is soonÂ issuing a commemorative postage stamp on Great Emperor Ashoka. King Asoka, the third monarch of the Indian Mauryan dynasty, has come to be regarded as one of the most exemplary rulers in world history. The British historian H.G. Wells has written: “Amidst the tens of thousands of names of monarchs that crowd the columns of history … the name of Asoka shines, and shines almost alone, a star.” Although Buddhist literature preserved the legend of this ruler — the story of a cruel and ruthless king who converted to Buddhism and thereafter established a reign of virtue — definitive historical records of his reign were lacking. Then in the nineteenth century there came to light a large number of edicts, in India, Nepal, Pakistan and Afghanistan. These edicts, inscribed on rocks and pillars, proclaim Asoka’s reforms and policies and promulgate his advice to his subjects. The present rendering of these edicts, based on earlier translations, offers us insights into a powerful and capable ruler’s attempt to establish an empire on the foundation of righteousness, a reign which makes the moral and spiritual welfare of his subjects its primary concern. The Australian bhikkhu Ven. S. Dhammika, the compiler of the present work, is the spiritual director of the Buddha Dhamma Mandala Society in Singapore.