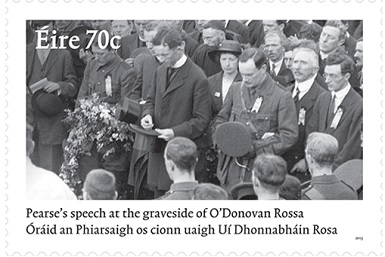 Ireland has issued a stamp on 30th July 2015 on the occasion of the centenary of Padraig Pearse’s legendary eulogy to west Cork-born patriot, Jeremiah O’Donovan Rossa (84), with a new stamp.The stamp features a graveside photograph of Pádraig from the Keogh Collection at the National Library. O’Donovan Rossa, born in Rosscarbery, was an early recruit to the Irish Republican Brotherhood (IRB) who died in New York in June 1915, aged 84. His body was repatriated back to Ireland where the IRB arranged a major funeral on August 1, as a mark of support for Irish independence.Pearse, a member of the IRB’s Military Council, was chosen to give the graveside oration. After the burial, dressed in the uniform of an Irish Volunteer officer, he stood forward and gave one of the most famous funeral orations in Irish history.