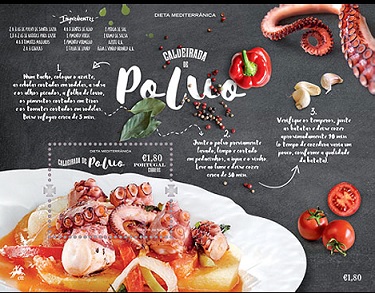 The Mediterranean Diet is a food concept that, within the history chronology, is as much timeless as it is accurate. Its classification as “Intangible Cultural Heritage of Humanity” by UNESCO confirms not only the existence of a specific food regime, but also a historic trace born within the Mediterranean. This is the legacy that the current issue of stamps intends to celebrate.

Although the Mediterranean diet has been born in association with a particular food style, its concept has proved to be quite evolutionary and comprehensive. The UNESCO has initially classified the joint proposal from Spain, Greece, Italy and Morocco in 2010. Three years later, the international peer-review committee met in the city of Baku, in Azerbaijan, to favorably resolve upon the ratification of the original proposal, thus allowing the inclusion of Cyprus, Croatia and Portugal.

In December 2013, Portugal was then registered as a country where the Mediterranean Diet goes beyond the nutritional aspect, persisting as anthropological, sociological and gastronomic heritage. This issue of stamps reveals the Southern gastronomy as a symbol of that heritage. The Algarve region is the natural heir of what the Mediterranean has left us, but the historical background extends also to Alentejo. On the one hand, regional specialties from Alentejo, such as the purslane broth or the sweet potato Portuguese scones, are illustrated in two of the stamps. On the other hand, the dishes particular to the Algarve region, such as the pickled horse mackerels and the chick-peas with pears stew, appear in the other two. The souvenir sheet highlights the Algarve region as the “cradle” of our Mediterranean Diet, with emphasis given to an octopus stew recipe. It is about a philatelic tour through these two regional cuisines seasoned by the Mediterranean which, in spite of being ancestral cuisines, are still part of pleasure of living in the contemporary Portugal.