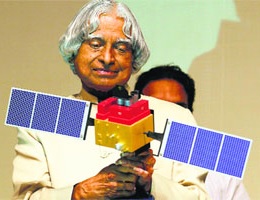 As a tribute to the former President A.P.J. Abdul Kalam, the Department of Posts will release commemorative stamps on his birth anniversary on October 15.Members of the South India Philatelists Association had recently submitted a request to the Department of Posts to bring out a set of four stamps on Mr. Kalam. Association secretary Roland Nelson said: “Mr. Kalam was a multi-dimensional personality. There have been instances when stamps of eminent people were released when they were alive — former president Rajendra Prasad, for instance, in 1962 after his retirement.”

Normally, it will take three to four months to design and release a stamp. But the Department of Posts has decided to release the stamp on October 15. The department has brought down commemorative stamps on all past Presidents of India.