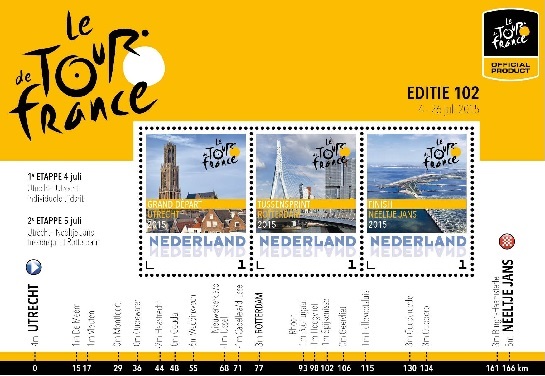 The Netherlands issued special stamps on 4th July 2015 on Tour de France in the Netherlands .PostNL issued the Tour de France mail set specially for the start of the Tour. The set contains a stamp sheet with three new stamps and three matching postcards. The set features the route of the first two stages of the world’s largest bicycle race.

The stamps and cards feature the ‘Grand Départ’ at the St. Martin’s Cathedral Tower (The Dom) in Utrecht, the intermediate sprint at the Erasmus Bridge in Rotterdam and the finish over the Eastern Scheldt storm surge barrier towards Deltapark Neeltje Jans.