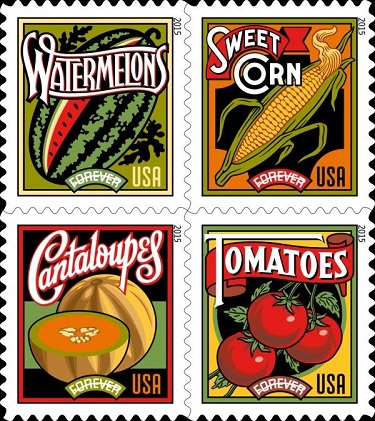 USPS is issuing stamps on  watermelon, corn on the cob, cantaloupes and tomatoes .The first day of issue for these stamps is July 11, but the idea goes back to 2002. That’s when Michael Doret, a Los Angeles-based artist and designer, began working on six designs for American fruits and vegetables with Richard Sheaff, who was then an art director for the postal service. Then the project was shelved. In 2013, Doret was talking with another art director working for the postal service, Antonio Alcala, about some work and brought up the food project. Alcala took the idea back to the postal service, Doret said, and the project was on but with four designs instead of six.