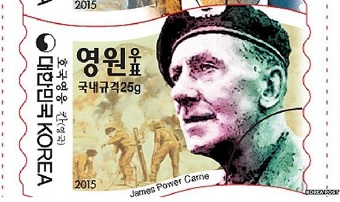 During the Korean War, Lt Col James Power Carne led 700 men of the Gloucestershire Regiment against more than 10,000 Chinese in the Battle of Imjin River in 1951.He was eventually captured and spent 19 months in solitary confinement, and was later awarded the Victoria Cross.He is depicted on one of 10 stamps issued to commemorate the 65th anniversary of the start of the war.The Korean War began in June 1950 and ended with an armistice agreement in July 1953.