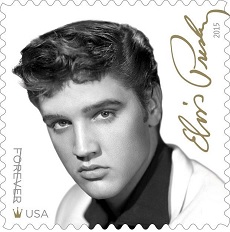 On Aug. 12, the U.S. Postal Service will release an Elvis Presley postage stamp as part of its “Music Icons” series (previous honorees include Johnny Cash, Jimi Hendrix and Janis Joplin). That morning, Priscilla Presley and Postmaster General Megan Brennan will dedicate the stamp during a ceremony at Graceland as part of this year’s Elvis Week celebration.

The image on the new forever stamp is a black and white photograph of Presley taken in 1955 by William Speer. A small crown in the corner of the stamp alludes to Presley’s nickname, “The King of Rock ‘n’ Roll.”