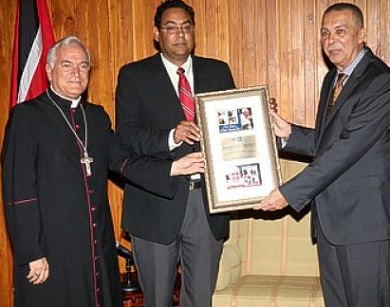 President of  Trinidad and Tobago Anthony Carmona was presented with a framed copy of two sets of postage stamps respectively from Ghana and Grenada, each commemorative set featuring His Excellency with Pope Francis the latter playing the steelpan. The presentation at the Office of the President, St Ann’s, was made by Trinidad and Tobago Philatelic Society, vice-president, Albert Sidney.

Also present was Papal Nuncio, Nicola Girasoli, and Apostolic Nunciature Chargé d’Affaires, Monsignor Pawel Obiedzinski. At their meeting on July 6, 2013, at Vatican City, Carmona presented a tenor pan to Pope Francis, who immediately tried his hand at playing it.  Upon being presented with the stamp sets, Carmona said, “Thank you very much. I will certainly cherish it.” Sidney said the issuance of the stamp-sets was very historic, saying the last time a Trinidad and Tobago head of State had been featured in an international postage-stamp had been in 2003 when former president Arthur NR Robinson had been honoured for his role in setting up the International Criminal Court.  “So it is very significant that the international community focussed on President Carmona and Pope Francis and steelpan,” said Sidney.  “It’s very good in terms of the deepening of relations between the two countries, and in terms of promoting the steelpan.”  Sidney thanked Girasoli for his help towards the event by having liaised with his Ghanaian counterpart.(Source Newsday)