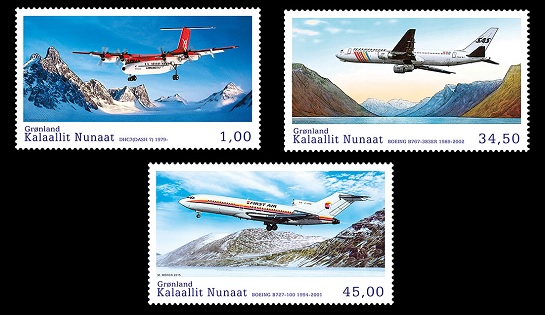 Two of the three stamps in this is- sue deal with aircraft flown by companies whose principal base is outside Greenland. They are, re- spectively, SAS and First Air. The aviation series is scheduled to continue to 2017 when the series will conclude with the publication of a book that brings together all the stamps in this aviation series.

To celebrate the HM The Queen’s 50th birthday in 1990, the then Greenland Home Rule named an ap- proximately 4,500 sq.km. area by Ittoqqortoormiit (Scoresbysund), East Greenland “Queen Margrethe II’s Land”. The area lies off the Greenland Sea.