This year, the U.S. Postal Service celebrates the 2015 Special Olympics World Games, the 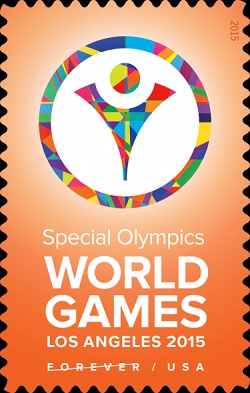 flagship event of the Special Olympics movement. The Games will be held in Los Angeles from July 25 to August 2. More than half a million spectators will enjoy nine days of challenging and inspiring international competition as more than 7,000 athletes from 177 countries compete in 25 Olympic-type sports.

The stamp features the 2015 Special Olympics World Games Los Angeles logo, showcasing the colors of flags from participating countries. “The logo’s celebratory figure represents the courage, determination and joy of our athletes,” says Patrick McClenahan, president and chief executive officer of the 2015 Games.

“Placing the iconic image inside the circle represents acceptance and inclusion of people with intellectual disabilities.”