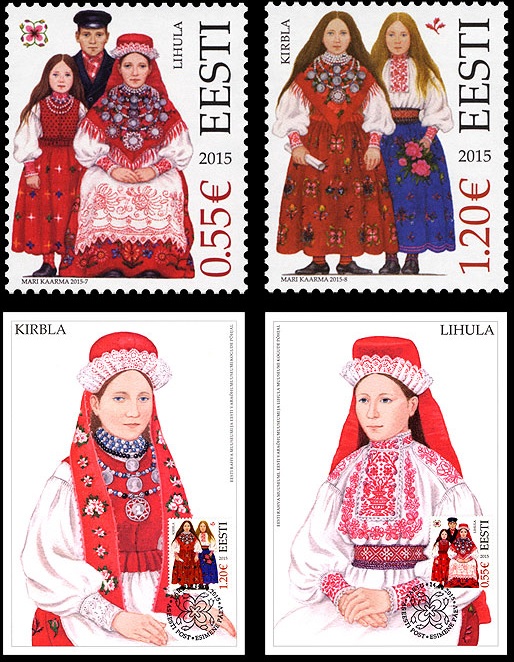 The fashion of flowery skirts developed at the end of the 19th century. It was triggered by the decoration of carpets with flowery embroidery that was called “roosimine”. The rose embroidery carpets spread also to other places but rose embroidery skirts were only made in Lihula and in the neighbouring parish of Kirbla. At the turn of the 19th and 20th century the Lihula and Kirbla folk costumes were so similar that it was often not possible to identify by their style, and they were often made by the same masters. Earlier striped, checkered and patchwork skirts were knitted, and they were worn simultaneously with flowery ones. One such patchwork skirt is worn by the Lihula girl pictured in the postage stamp. The favourite colour at later times was bright red, but there are also skirts embroidered in darker red and bright blue fabric. Also the number of decorations raises attention and sometimes the whole chest is covered with coins. Married women’s hats had wide lace and with wide and long ribbons. For apron cloth often curtain laces were used. Lihula and Kirbla shirts have very wide cuffs. At the end of the 19th century shirts started to be decorated with red cross-stich embroidery. The shirts of the grooms were particularly sumptuous. The Lääne County men usually wore a rather townish ware; the fashion headgear was a peaked cap. The FDC has a part of the Kirbla woman’s shirts breast flap in cross stitch and the first day cancellation features the motif that is represented on Lihula and Kirbla embroidered skirts.