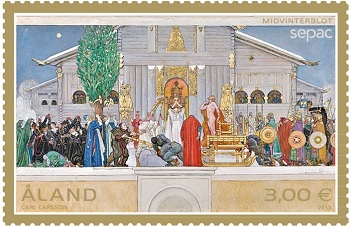 Aland will issue a stamp on 10th April 2015 on culture theme. The stamp shows one of painter Carl Larsson’s most controversial and known paintings, Midvinterblot (‘Blót’). The painting in the stamp, however, is a parallel work of art which is in the possession of Åland businessman Anders Wiklöf.The smaller Midvinterblot was painted parallelly and ‒ unlike its gigantic double ‒ it was signed. The painting went under the hammer for SEK 3.2m at an auction in Stockholm in 2002 and is now included in Anders Wiklöf’s private collection at Andersudde.Carl Larsson (1853-1919) is one of the most popular and well-known painters in Sweden.