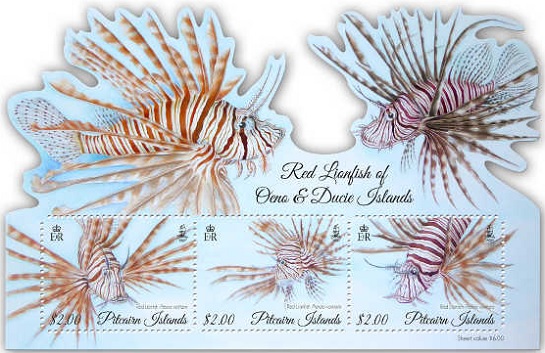 Pitcairn Island has released three stamps on 26th February 2015 depicting gorgeous lionfish. The red lionfish (Pterois volitans), also known as the scorpionfish, firefish and turkey fish, is a tropical coral reef fish found in the Indo-Pacific region, reaching as far east as French Polynesia. It has now become a potential threat on the Atlantic coasts of the USA and in the Caribbean through accidental introduction.

It prefers a habitat with water temperatures of between 22°C and 28°C and swims at the depth range of 10 to 175M. It favours coral reefs and rocky outcrops, although it has been observed over coral patches, near sandy bottoms and in mangrove, seagrass and even canal habitats. It is also found in lagoons and harbours.