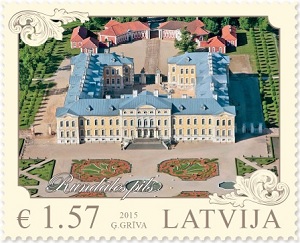 Latvia has issued a stamp on gorgeous Rundāle Palace –the most prominent Latvian architectural masterpieces on   24th  July 2015.

Rundāle Palace is one of the most outstanding architectural monuments in Latvia and a significant Baroque architecture ensemble with a palace, stables and a park. The palace was built from 1736 until 1740 after the design of Francesco Bartolomeo Rastrelli, the famous Russian imperial court architect. The palace ensemble rises above the Zemgale lowland with its unspoiled countryside, preserving the original idea of the architect: the palace in the center, symbolizing the power of the ruler, and alleys stretching out into infinity.Restoration of the palace ensemble was started in 1972 and completed in 2014. In 2015, the Rundāle Palace restoration project won the Latvian Architecture Award. The interior decor reflects the appearance of the palace in the second half of the 18th century. Visitors are welcome to tour the regular French park designed by Rastrelli, featuring the largest historic rose garden in North Eastern Europe, the Green theater, ornamental parterres and a fountain.