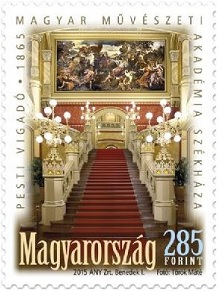 Hungary has issued a stamp on 24th July 2015 on 150 Years of  the headquarters of the Hungarian Academy of Arts, Pesti Vigadó.

The commemorative stamp displays part of the ceremonial staircase with a painting by Mór Than entitled “Fairy Ilona meeting her lover”. By the end of the Ottoman occupation in 1686, Pest lay in ruins. At that time, the stern stone blocks of a redoubt for the defence of the city stood in the area of today’s Vigadó tér. In 1789 it was demolished so as to be replaced by a theatre building, which was not built for quite a while due to lack of funds. The Pest public did not cease demanding a ballroom and, finally, construction was started in 1829 on the basis of Mihály Pollack’s plans.