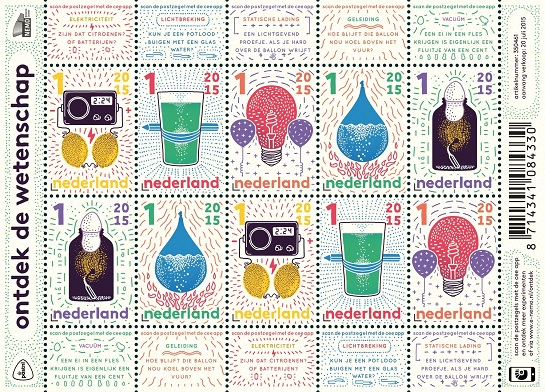 The Netherlands has released five stamps  on 20th July 2015 that features physics experiments that can be even performed by children. The issue was designed in collaboration with the Science Center Nemo, a hands-on interactive science and technology museum in Amsterdam.Each stamp includes an embedded code that links through a smart phone to the museum’s website.

The first stamp shows a lemon battery. According to the Kids Science for Real website, all you need to make this battery is a screw, a coin (made of copper), a lemon and wires. The site also recommends potato, tomato, orange and banana batteries for those who want to experiment further with food that can generate electricity.

The next stamp illustrates light refraction by showing what appears to be a bent pencil and a glass of water. The Merriam-Webster dictionary defines refraction as “deflection from a straight path undergone by a light ray or energy wave in passing obliquely from one medium (as air) into another (as glass) in which its velocity is different”.

Two stamps feature experiments with balloons.One design depicts a light bulb charged by the static electricity from two balloons.The other shows a balloon filled with water over small flames of fire. Normally when a balloon is placed over a flame, the balloon pops. However, when it is filled with water, the water absorbs the heat and the balloon does not pop.

The final stamp shows a hard-boiled egg being squeezed through the narrow neck of a bottle. This experiment illustrates air pressure.