Estonia: European U23 Championships in Track and Field Athletics 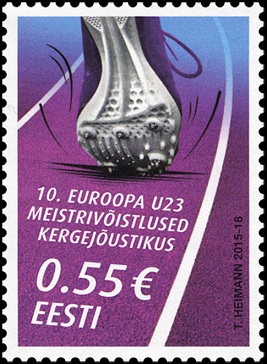 One of the major track and field events in Europe in 2015 – the tenth U23 championships – will bring to the historical Kadriorg stadium in Tallinn in the period from 9 to12 July about a thousand track and field athletes of up to 23 years old from 46 countries. Estonians have so far won seven medals from U23 European championships, last by Rasmus Mägi, who won the bronze medal in the 400 m hurdles race. 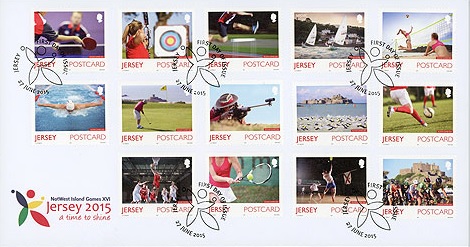 Since 1985, the Island Games have become an important fixture in the sporting calendars of island nations around the world. Originally intended as a one-off sporting celebration, over the years the Games have grown in both popularity and stature to become a prestigious, biennial multi-sports event.

Having last hosted the event in 1997, the island of Jersey is proud to be home to the Island Games once again. From 27 June to 3 July 2015, Jersey’s Island Games volunteers or ‘Games Makers’ will welcome around 3,000 competitors  and 1,000 officials from 23 visiting islands. A sponsorship deal with NatWest means that this year’s event will be known as the NatWest Island Games.

Fourteen postcard stamps have been created to represent each of the sporting categories. A prestige booklet has also been produced to commemorate this significant event and contains five exclusive panes of stamps, additional photography and information about the Games. 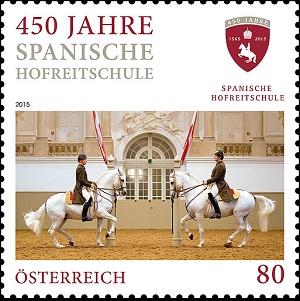 2015 is a special year for the Spanish Riding School, since this world-famous institution is celebrating its 450th anniversary. In September 1565, a document was issued mentioning an amount of 100 guilders “for the erection of the Thumblplatz in the Castle Gardens here”. This open-air riding and tournament arena immediately next to the Vienna Hofburg was the precursor of the Spanish Riding School – today the only institution in the world that for 450 years has lived and cultivated the High School of Classical Horsemanship in the Renaissance tradition.

The tradition of training and riding goes back to the teachings of the Greek general Xenophon around 400 BC. Even today, this knowledge is passed on orally from experienced chief riders to the cadets. A good chief rider is one who can train the horses and convey his knowledge as a teacher. It is in this way that the quality is maintained and the Riding School preserves this unique cultural heritage as a living tradition for which this institution enjoys a worldwide reputation.

The Lipizzaner horses themselves are one of the world’s most significant cultural assets, since this, the oldest European cultural horse breed can boast over 400 years of breeding history. Archduke Karl II founded the Imperial Stud Farm on the karst near the village of Lipica (today in Slovenia) in 1580. Over the following centuries, the Habsburg monarchs bred a new horse breed from Spanish horses which ideally fulfilled the representative requirements at the baroque court.

The best stallions were selected for Vienna. Refined through years of training in the Riding School, they became an indispensable part of life at court. The “Karst Imperial Stud Farm” was the private stud farm of the Austrian Imperial family from 1580 to 1915. In 1920, the valuable part of the original herd remaining in Austria was trans- ferred to the Styrian village of Piber, roughly 45 km west of Graz. It is here that today the direct descendants of the old imperial herd are bred. The name Lipizzaner, incidentally, first became common in the early 19thcentury, until when these horses had been known as “Spanish karst horses”, a reference to their noble Spanish blood.

The main functions of the Spanish Riding School and the Styria stud farm in Piber include the breeding of the classical Lipizzaners, the training of the stallions accord- ing to the principles of Classical Horsemanship and the training of suitable chief riders.

On the occasion of the anniversary year, a number of glittering festivities are to be held in 2015. The absolute highlight will be a gala performance on Heldenplatz in the inner city of Vienna in front of the presidential chancellery at the end of June. Alongside the “airs above the ground”, this unique event will also present “work in hand” and “work on the long reign”, a magnificent solo and a pas de deux, which also decorates the commemorative stamp. These celebrations will be followed by the 6th Fête Impériale, the traditional summer ball of the Spanish Riding School.