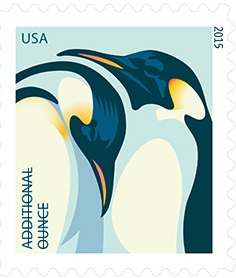 The stamp depicts majestic emperor penguin (Aptenodytes forsteri).Largest of the penguin species, the emperor stands over three feet tall and can weigh more than 80 pounds. Emperor penguins rely on a layer of fat and a waterproof coat of short, stiff feathers to protect them from the subzero temperatures, powerful winds, and icy waters in their Antarctic habitat. Emperor penguins can dive deeper than 1,500 feet in pursuit of fish, squid, and crustaceans-farther than any other bird. They can stay submerged for nearly 20 minutes, though they usually resurface much sooner.

The stamp art is a stylized drawing of a pair of emperor penguins on a cool green background. The pop of orange and yellow on the birdsâ beaks and ear patches lends a regal look to the aptly named emperors.