Austria has issued a stamp on Brown Hare under  “Wild animals and hunting” series.The brown hare is characterised by its long ears and its legs. In hunting jargon, its tail is referred to as the “scut”. The hare is often described as shy and fast. The animal known under the Latin name Lepus europaeus is to be found on almost all the continents as a result of colonialisation, although originally it was only native to Europe.

Brown hares live in forests, on fields and meadows, eating roots, clover, corn, cabbage and bark. Like all species of the Lepus genus, they become sexually mature at a young age and they give birth up to four times a year. They bear two to five young that can already see and smell when they are born and very soon become independent of the mother – they are obliged to fend for themselves at the age of between three and four weeks. The young are born in what is called a form, a shallow depression or a protected spot beneath a hedge or in the undergrowth. It is here that they generally spend their days, being active in the evening and in the night.

Day of the stamp 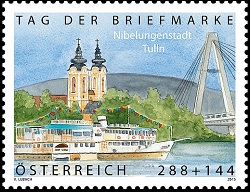 The town that decorates the stamp for the Day of the Stamp in Austria this year is often referred to as the town of flowers or roses: Tulln on the Danube is famous for its many nurseries, the gardening fair and a broad floodplain landscape. It is one of the oldest towns of Austria, having been settled as early as the pre-Roman age. Today, this district town has a population of around 15,600 and occupies an area of 72 square kilometres.The colourful commemorative to celebrate the Day of the Stamp 2015 shows the Nibelungen town of Tulln with the church towers, the striking Rose Bridge and the vintage ship in the foreground. It has a nominal of Euro 2.88, the Euro 1.44 surcharge being used to promote philately. 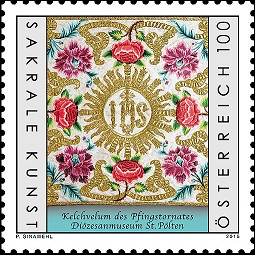 The chalice veil of the “Whit regalia” from the paramenta collection of the Institute of the Blessed Virgin Mary in St Pölten decorates this Austrian Post commemorative from the “Religious art” series.

A chalice veil is a cloth, often finely ornamented, that in the Roman Catholic Mass and the Lutheran Eucharist covers the chalice for the consecrated hosts or the wine. The chalice veil presented here is part of a whole series of liturgical textiles known together as the “Whit regalia” or the “Maria Theresia regalia”. These include ante- pendia, i.e. curtains for below the altar, stoles and copes (liturgical vestments). These magnificent textiles made of velvet are decorated with gold, silver and petit-point embroidery, and are lined with taffeta.