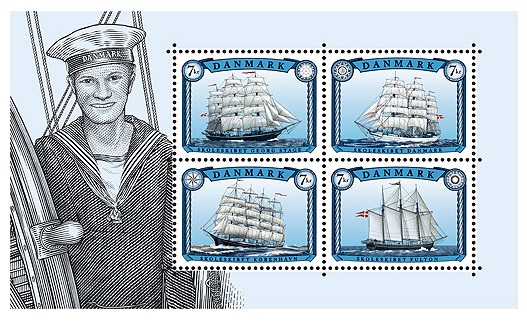 The four stamps depict the training ship KØBENHAVN, which disappeared in 1928, the two current training ships DANMARK and GEORG STAGE, while the last stamp depicts FULTON, which is primarily used for school trips for primary and lower secondary school pupils, continuation school etc. 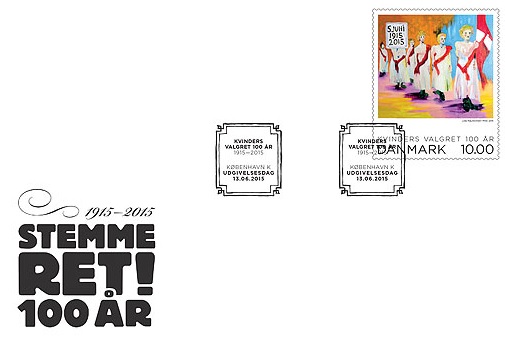 It was a huge victory for Danish women when they won the right to vote and stand for election in 1915. Before had gone dec- ades of campaigning, which had mobilised thousands of women and which culminated in a large march on the royal residence Amalienborg on 5 June 1915.

Post Danmark is marking the centenary by issuing a stamp based on a painting by Lise Malinovsky. The painting is a contemporary interpretation of the march organised in celebration of women gaining the right to vote and stand for election to the Folketing and Landsting. 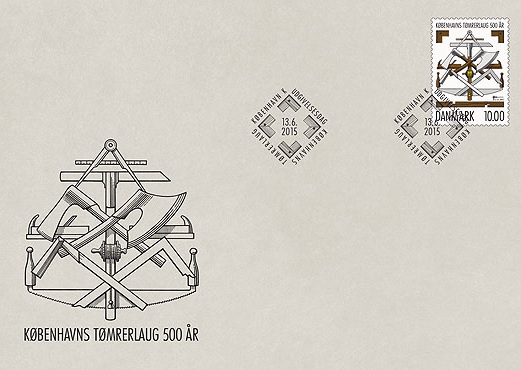 Most tradesmen uphold the traditions of their craft and take pride in producing good workmanship. In the Greater Copenhagen area, the Copenhagen Carpenters’ Guild has now been working for 500 years to build respect for the carpentry trade. At the same time, the guild is moving with the times and preparing for the future, thereby ensuring that future generations of master carpenters have something to build on and something to preserve. Post Danmark is marking the anniversary with a stamp depicting the guild’s logo and showing a selection of traditional carpentry tools.

Me, Said the Dog

On 13 June 2015, Post Danmark has issued three new franking labels featuring Danish national dog breeds. The three images depict a Danish-Swedish watchdog, a pointer and a Danish spitz. All three dogs have been chosen in cooperation with the Danish Kennel Club.“Post Danmark’s franking labels are making a great contribution to highlighting the importance of preserving national Danish dog breeds,” says communication consultant Vibeke Knudsen from the Danish Kennel Club, which is the biggest (33,000 members) and the oldest (founded in 1897) club for dog-owners in Denmark. Over the years, the club has spearheaded the work to reserve the old Danish dog breeds.

amosvej 8, 2300 København S, Danmark – an address on Amager in Copenhagen – is the title of the work which the painter and graphic artist Jesper Christiansen (b. 1955) has created for the Stamp Art series. The artist lived at this address when he painted the work, and the image shows the view from his own studio. Jesper Christiansen graduated from the Royal Danish Academy of Fine Arts, where he also taught as a professor from 2003 to 2008. In public he is particularly well known from an art quiz on DR2, where in recent years he has appeared as a popular presenter of art. In addition to receiving the Eckersberg Medal from the Royal Danish Academy of Fine Arts, Jesper Christiansen has also been awarded the Danish Arts Foundation’s lifelong artist grant.