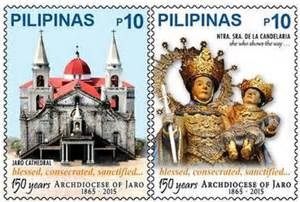 The Philippine Postal Corp. is releasing a set of  commemorative stamps marking the 150th anniversary of Jaro Archdiocese in Iloilo.Images of the stamps tweeted by the National Commission for Culture and the Arts showed two designs of the stamps.One depicted the Jaro Cathedral while another depicted the Nuestra Señora de la Candelaria. Both designs are in P10 denomination, and bear the slogan “blessed, consecrated, sanctified”. Jaro, which was established on May 27, 1865, is the fifth oldest diocese in the Philippines, the PHLPost said.