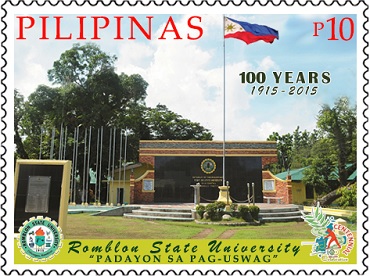 Philippines has issued a new  stamp marking the centennial of Romblon State University.The school was established to train locals in agricultural arts to establish food sufficiency in Romblon, which was then a sub-province of Capiz.A secondary course in farming for boys and housekeeping for girls was opened in June 1916. In 1929, it was converted into Odiongan Rural High School.The school was renamed Odiongan High School in 1947, and became Odiongan National Agricultural School on December 1, 1956.After more name changes, it became a state college in 1978, and became Romblon State College in September 1983.But it was on October 14, 2009, that then-President Gloria Arroyo signed an act establishing the Romblon State University.