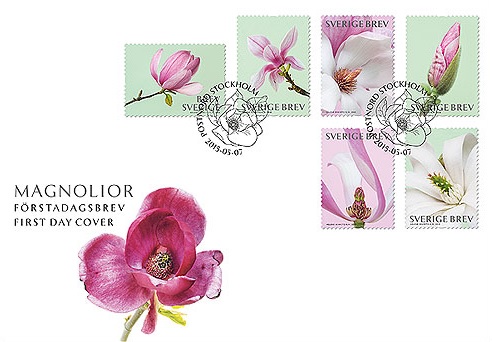 In the early spring of 2014, photographer Helene Schmitz dragged magnolia plants of all sizes, from more easily handled plants to small trees, up four flights of stairs without an elevator to her studio in central Stockholm.The images on the six magnolia stamps are exactly the same images Helene Schmitz saw in her viewfinder when she pressed the button and perpetuated the motif. The camera format meets the stamp format, with wonderful flower art as the result.

Charity Stamp 2015 – For the Environment’s Sake 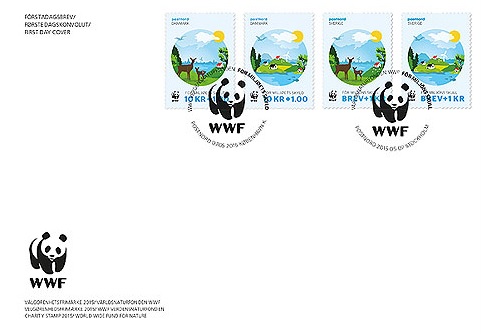 PostNord has decided that the money raised from the sale of the charity stamp in Sweden will go to Earth Hour City Challenge, an international project for sustainable cities that was started in Sweden and has spread throughout the world.The charity stamps will have the same design in Sweden and Denmark. In Sweden the stamps will be packaged as a booklet of ten stamps and sell for SEK 80, of which SEK 10 will go to the World Wildlife Fund.

This year’s charity stamp also has some other firsts. It is the first time PostNord’s logotype is displayed on a stamp. WWF’s logotype will also be displayed with the message, “För miljöns skull” (For the environ- ment). The aim is to show that everyone, from private individuals to companies, can work together for the environment. 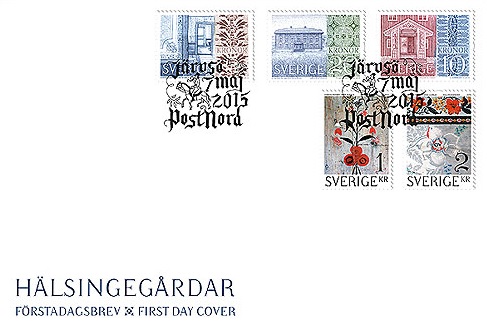 When UNESCO decided three years ago to list the farmhouses of Hälsingland as the 15th Swedish World Heritage site since Drottning- holm Castle in 1991, it used the title, Decorated Farmhouses of Hälsingland. This title highlights what make these farmhouses unique on a global scale, namely their richly decorated and well-preserved interiors.These decorations also played a central role when Nina Ulmaja designed the five stamps.

A Hälsingland farmhouse that was named to the World Heritage list for its exterior is depicted on the stamps with the denomination SEK 20. The name of the farmhouse is Jon-Lars and it was built in the middle of the 1800s with two identical parts for two brothers. This impressive building shares its stamp with a decoration from the Kristofers farmhouse, which was built in the 1800s.

Wealthy Hälsingland farmers began building large houses with lavish interiors as early as the 17th century. During the following century more and larger farmhouses were built, and the building frenzy culminated in the 19th century when a single farmhouse could contain up to fifteen decorated rooms.

Normally, only a few rooms in the farmhouse were used on a daily basis. The rest of the rooms lay in wait for important family events, such as weddings, but then these lavishly decorated rooms lived up to their potential and functioned as not only a worthy but also a festive framework for the celebration.