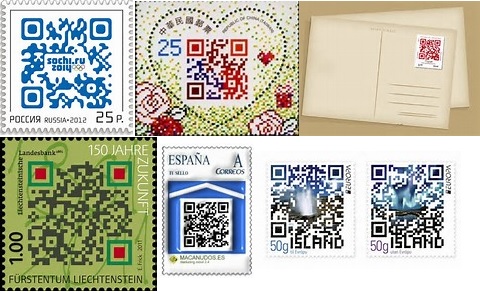 QR code (abbreviated from Quick Response Code) is the trademark for a type of matrix barcode   (or two-dimensional barcode  ) first designed for the automobile industry in Japan  . A barcode is a machine-readable optical label that contains information about the item to which it is attached. A QR code uses four standardized encoding modes (numeric, alphanumeric, byte / binary, and kanji) to efficiently store data; extensions may also be used.

A QR code consists of black modules (square dots) arranged in a square grid on a white background, which can be read by an imaging device (such as a camera) and processed using Reed-Solomon   error correction until the image can be appropriately interpreted. The required data are then extracted from patterns present in both horizontal and vertical components of the image.

The QR code system was invented in 1994 by Denso   Wave. Its purpose was to track vehicles during manufacture; it was designed to allow high-speed component scanning. Although initially used for tracking parts in vehicle manufacturing, QR codes now are used in a much broader context, including both commercial tracking applications and convenience-oriented applications aimed at mobile-phone users (termed mobile tagging). QR codes may be used to display text to the user, to add a vCard contact to the user’s device, to open a  Uniform Resource Identifier (URI), or to compose an e-mail or text message. Users can generate and print their own QR codes for others to scan and use by visiting one of several paid and free QR code generating sites or apps. The technology has since become one of the most-used types of two-dimensional barcode.

QR codes have become common in consumer advertising. Typically, a smartphone is used as a QR code scanner, displaying the code and converting it to some useful form (such as a standard  URL for a website, thereby obviating the need for a user to type it into aweb browser  ). The QR code has become a focus of advertising   strategy, since it provides a way to access a brand’s website more quickly than by manually entering a URL. Beyond mere convenience to the consumer, the importance of this capability is that it increases theconversion rate   (the chance that contact with the advertisement will convert to a sale), by coaxing interested prospects further down the  conversion funnel with little delay or effort, bringing the viewer to the advertiser’s website immediately, where a longer and more targeted sales pitch may lose the viewer’s interest.

Although initially used to track parts in vehicle manufacturing, QR codes are now (as of 2012) used over a much wider range of applications, including commercial tracking, entertainment and transport ticketing, product/loyalty marketing (examples: mobile couponing where a company’s discounted and percent discount can be captured using a QR code decoder which is a mobile app, or storing a company’s information such as address and related information alongside its alpha-numeric text data as can be seen in Yellow Pages directory), and in-store product labeling. It can also be used in storing personal information for use by organizations. An example of this is Philippines National Bureau of Investigation (NBI) where NBI clearances now come with a QR code. Many of these applications target  mobile phone users (via mobile tagging ). Users may receive text, add a  v Card contact to their device, open a URI, or compose an email or text message after scanning QR codes. They can generate and print their own QR codes for others to scan and use by visiting one of several pay or free QR code-generating sites or apps.  google had a popular  API to generate QR codes, and apps for scanning QR codes can be found on nearly all smartphone devices.

QR codes storing addresses and URLs may appear in magazines, on signs, on buses, on business cards, or on almost any object about which users might want information. Users with acamera phone   equipped with the correct reader application can scan the image of the QR code to display text, contact information, connect to a, wireless network,or open a web page in the telephone’s browser. This act of linking from physical world objects is termed  hardlinking or  object hyperlinking. QR codes also may be linked to a location to track where a code has been scanned. Either the application that scans the QR code retrieves the geo information by using GPS and cell tower triangulation (aGPS) or the URL encoded in the QR code itself is associated with a location.

Recruiters have started placing QR codes in job advertisements, while applicants have started sporting it in their CVs and visiting cards.

In June 2011, The Royal Dutch Mint (Koninklijke Nederlandse Munt) issued the world’s first official coin with a QR code to celebrate the centenary of its current building and premises. The coin can be scanned by a  smart phone and link to a special website with contents about the historical event and design of the coin. In 2014, the Central Bank of Nigeria issued a 100-naira banknote to commemorate the centennial of its existence. It is the first banknote to incorporate the QR code into its design. When scanned with an internet-enabled mobile device, the code goes to a website which tells the centenary story of Nigeria. In 2008, a Japanese stonemason announced plans to engrave QR codes on gravestones, allowing visitors to view information about the deceased, and family members to keep track of visits.