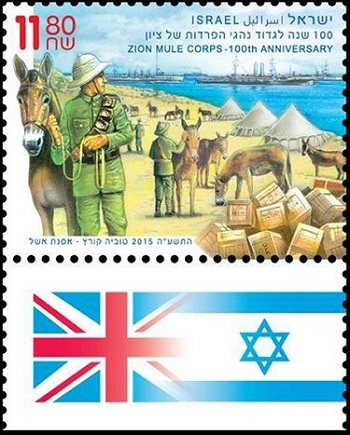 In April 1915, a large British military force landed on the shores of the Gallipoli peninsula, not far from the city of Istanbul, the capital of the Ottoman Empire. On April 16, 1915, after only a brief twoweek training period, the Mule Corps joined the main force which had landed on the southern shore of Gallipoli. The stamp is adapted from a photo of the Mule Corps soldiers as they came ashore in Gallipoli. It quickly became apparent that the British action on the Gallipoli peninsula was a failure. The Turks fought fearlessly and the invading forces suffered heavy casualties.

The Mule Corps soldiers, who transported ammunition and supplies to the troops on the front line, executed their difficult and wearing job very well. Despite the danger and the terrible conditions, the Jewish volunteers persevered under fire, in the mountainous terrain of the peninsula, until the British withdrawal and departure from Gallipoli on the night of January 1, 1916. During this period the Corps suffered nine casualties and approximately 50 of its men were wounded.

Ninety men were present at the final parade before the British departure, approximately 25% of the original force, and only 11 of them were among the volunteers who had come ashore on April 27, 1915. The End of the Mule Corps A few months after returning to Egypt, the Mule Corps was disbanded on May 26, 1916. At Trumpeldor’s initiative, some 120 members of the corps reenlisted. They were sent to Britain, where they served as the core of the newly formed 38th Battalion of the Royal Fusiliers, the first Jewish combat unit within the framework of the British military.

The Universal Exposition, which was first held in London in 1851, serves as a platform for exhibiting mankind’s most ambitious successes in the realms of technology, innovation 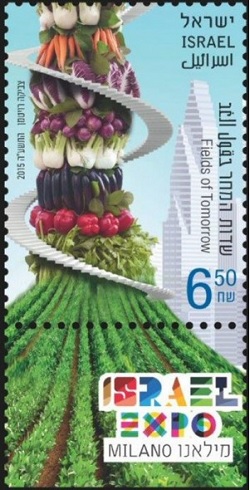 and discoveries. This non-profit expo allows each country to present the best it has to offer the world at that moment in time.

Expo Milano 2015 will present human history seen from the combined aspects of cultural and traditional values and new technologies in relation to the food industry. This is part of a cultural journey that aims to highlight the development and changes currently faced by the entire population of the Earth.

The theme of the Israeli pavilion at Expo Milano 2015 is The Fields of Tomorrow. The pavilion presents Israeli achievements and developments in water technologies – treatment, utilization, desalination, and more.

The pavilion expresses Israeli innovativeness in the field of creative energy. A model of a typical Israeli field is the pavilion’s key component and an inseparable part of the structure. This towering vertical field is 68 meters long and 12 meters high, stretching along the entire side of the Israeli pavilion. 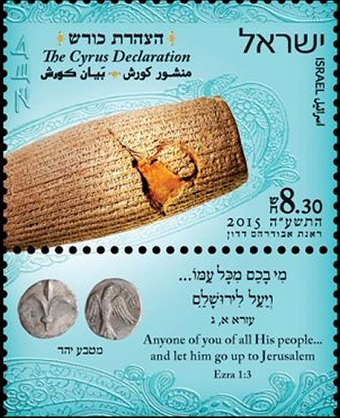 In the year 586 BCE, King Nebuchadnezzar of Babylonia conquered the city of Jerusalem, destroyed the Temple and sent many of the inhabitants of Judah into exile. The Babylonian Exile ended when the empire was conquered by Cyrus II of Persia and Media, who made a public declaration granting the Jews the right to return to Judah and rebuild the Temple in Jerusalem.

The Biblical Description In the year 539 BCE, after uniting the Persian and Median kingdoms under his rule, King Cyrus subdued the Babylonian Empire. He founded the First Persian Empire, ruling over large areas stretching from India in the east to Egypt in the west. In 538 BCE King Cyrus made a public declaration, the content of which was preserved in the Book of Ezra: “In the first year of King Cyrus of Persia… the Lord roused the spirit of King Cyrus of Persia to issue a proclamation throughout his realm by word of mouth and in writing”.

The Cyrus Cylinder Many modern biblical researchers were skeptical about the wording of the Declaration as described in the Book of Ezra. Among other things, they claimed that it was improbable that a Persian king would have made a declaration in Hebrew or declared that he was acting as a messenger of the God of Israel. But archeological excavations conducted in the ancient city of Babylon in 1879, discovered a clay cylinder bearing a long inscription in Akkadian.

This archeological discovery strengthened the view that Cyrus was sympathetic and supportive of all the peoples under his rule and that the Declaration which appeared in the Bible was an accurate reflection of history.

The Cylinder of Cyrus appears in the foreground of the stamp, with decorations inspired by Persian art in the background. Following the Cyrus Declaration, some of the Babylon Exiles returned to Jerusalem, rebuilt the Temple and founded an autonomous Jewish province called Yehud Medinata. The stamp tab features a coin minted in this autonomous province in the mid-4th century BCE, during the Persian rule. The front of the coin is engraved with a lily and the back is adorned with a spread-winged falcon as well as the word “Yehud” in ancient Hebrew letters. The coin is part of the Israel Museum collection.