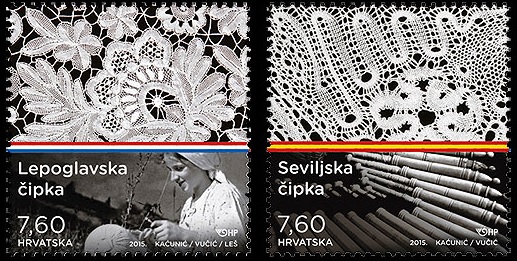 In recognition of the artistic and cultural values shared by Spain and Croatia, the postal services of both countries will circulate a joint issue dedicated to bobbin lace. The Croatian stamp will show lace from Lepoglava, and the Spanish stamp lace from Seville, both from the early 20th century. One special feature of this issue is that both stamps have perforations in the design, like real lace.

LEPOGLAVA LACE:The best known bobbin lace got its name by the municipality of Lepoglava, situated in the Varaždin County, in the north-west Croatia. In Lepoglava in the 19th and 20th century bobbin lace of various techniques and motifs was manufactured. Already at the end of the 19th century the lace craft in Lepoglava became part of the social politics i.e. organised home production, with the aim to ensure an income to village women. For its importance and role at the local and national level the lace craft of Lepoglava, together with the lace craft of Pag and Hvar was entered in 2009 in the UNESCO’s Representative List of the Intangible Cultural Heritage of the mankind

SEVILLE LACE: Made with silk, linen, cotton, gold or silver thread, lace was created and developed in Europe, spreading throughout the continent. Although its age is impossible to determine, lace became popular in the early 16th century when this delicate fabric became an essential part of European royal court attire. Italy and Flanders specialised in manufacturing, selling and distributing the latest lace fashions that were soon copied by other countries.

As one of the decorative arts, lace evolved in line with the artistic styles of each era, and we can identify Venetian, Renaissance, Baroque, Rococo, Art Nouveau, Art Deco or contemporary lace. Bobbin lace requires a pillow to support the pattern, pins to set in the places marked by the patterns, and wooden bobbins, used to wind the threads.

Croatia has a rich history of needle lace and bobbin lace making. The tradition is particularly strong in the town of Lepoglava, in the north-west, where an international lace fair is held each year. The piece shown on the stamp was produced by Danica Brösles, who is famous in her country.

There is evidence of Spanish lace dating back to the late 15th-early 16th century, when skilled hands created a native style known as “punto español”. The lace from Seville depicted on the stamp was made by Cándida García, a teacher who created new models based on those produced in Andalusia since the 17th century, known as twelve-bobbin lace. Patterns were produced for each customer, used only once and signed by the creator.